November 17, 2021
CoughPro is not a medical product. It is a wellness app intended only for users to obtain a better understanding of their cough. It is not intended to diagnose, monitor, or treat any illness. 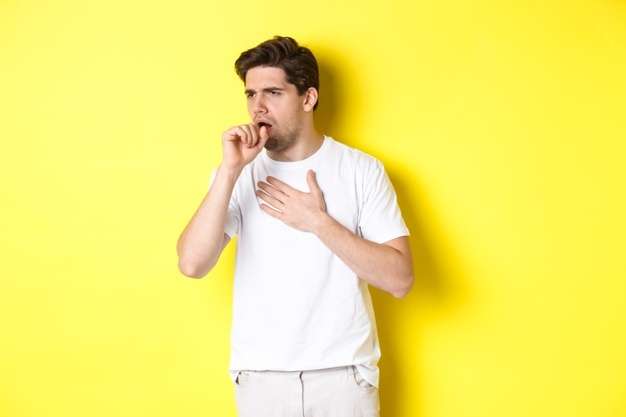 Laryngotracheitis is an inflammation of the upper respiratory tract, mainly the larynx, subglottic area from the vocal cords, and the trachea. A cough-induced inflammation occurs following the presence of a chronic cough - a cough lasting more than eight weeks.

Exploring Causes For Cough-Induced Laryngotracheitis: Can Coughing Hurt Your Throat?

Viral infections are self-limiting, subsiding on their own within a few weeks. Unfortunately, there are no specific antivirals for upper respiratory tract infections per se, except in cases of influenza. Rest, fluids, and supportive care in the form of over-the-counter medications are sufficient for managing symptoms of viral infections. Often, addressing the underlying cough-causing condition (whether acute or chronic) will improve the cough.

Following the management of flu-like symptoms, one of the last ones to leave is the nagging cough. During the infectious phase, an inflammatory response affects the upper respiratory system, which results in a cough. Unfortunately, once the infection clears away, a cough often lingers for a few weeks.

This recurrent irritation due to cough, results in inflammation of the larynx and trachea, subsequently leading to cough-induced laryngotracheitis. Laryngotracheitis cough has a barking quality. It appears as if originating from the chest, confusing it with another symptom, wheezing.

Once the other symptoms subside, but the persistent cough lingers, it often prompts attention for the management of the cough. This shift in focus aims to prevent the chronic cough from causing fatigue and chest pain. As a reflex, coughing is a forceful action that uses several muscles.

Additionally, due to recurrent coughing and inflammation, throat pain commonly arises. This pain makes swallowing difficult as well as speaking. Individuals may also experience discomfort as if they had some foreign object lodged within the throat—all a consequence of long-term inflammation.

Healthcare professionals usually investigate other possible underlying causes for the chronic cough before approaching treatment options. However, it is vital to consider that re-infection is a possibility as well.

The critical aspect of managing cough-induced laryngotracheitis is suppressing the cough to allow the inflammation to subside. This approach usually involves corticosteroid inhalers. Steroids are known to reduce inflammation, which is the main cough initiator in laryngotracheitis. As a result, most symptoms begin to subside in a couple of days, up to a week.

If the cough does not subside, usually doctors will investigate other possible causes of chronic cough.

Chronic coughs are known to reduce one’s quality of life substantially. Moreover, with the ongoing pandemic, a cough is also viewed as a sign of contagion.

In essence, diagnosis for an underlying cough is not always straightforward. This complexity is why continual cough monitoring is crucial. Tracking cough, and coinciding symptoms such as hoarseness, difficulty swallowing and pain in the throat, as in the case of cough-induced laryngotracheitis, helps to narrow down a possibility.

A cough is also largely influenced by lifestyle factors and the general environment. For example, smoking and air pollutants can heighten a post-infectious cough, aggravating laryngotracheitis. Additionally, exposure to allergens can increase the likelihood of having an asthma-variant of a chronic cough. Chronic coughing does not always involve a root cause in the respiratory system. It can also be a sign of involvement of other organ systems. This interplay can be seen in cases of heart failure and stomach acid reflux and not always that of the respiratory tract.

Due to the often complex nature and long-term implications of cough, long-term tracking is a potentially beneficial feature, especially for those who have prolonged or recurrent episodes of a chronic cough.

Today, tracking symptoms has become as easy as moving a few fingers across the screen. Many wearable smart devices track symptoms continuously, which is ideal in the case of a cough. It also provides an individual-centric approach to managing conditions such as cough-induced laryngotracheitis.