Upper Airway Cough Syndrome – A Common Cause Of Chronic Cough

November 12, 2020
CoughPro is not a medical product. It is a wellness app intended only for users to obtain a better understanding of their cough. It is not intended to diagnose, monitor, or treat any illness. 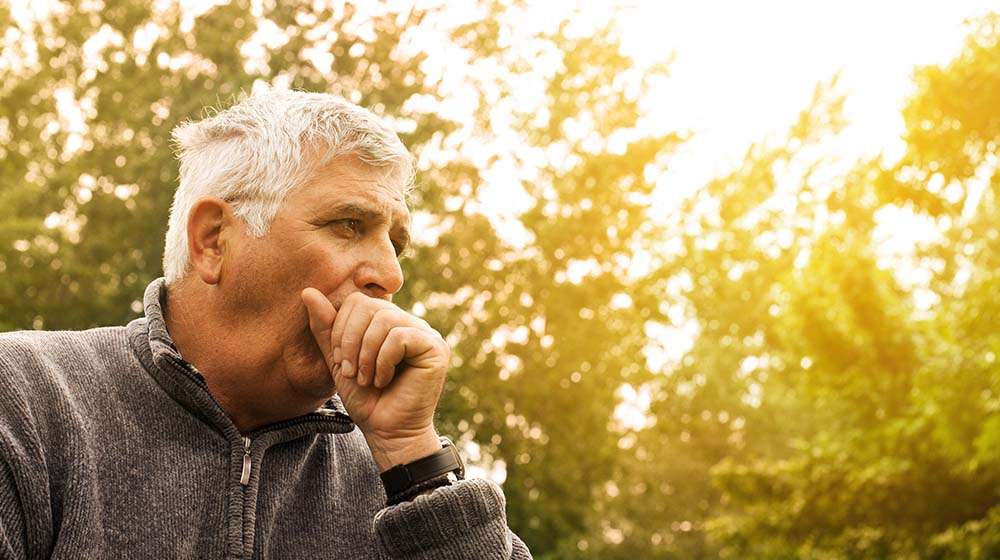 A cough that won’t go away causes many people to fear the worst. But a nagging cough isn’t always a sign of a severe underlying condition. It could be upper airway cough syndrome (UACS), one of the most common causes of chronic cough in adults.

The cough reflex comes about by inflammatory or mechanical changes or irritants in the airways. UACS involves upper airway and nasal irritation caused by allergies, a sinus infection (sinusitis), or acid reflux.
In this article, we will go through the symptoms, causes, diagnosis, and treatment of upper airway cough syndrome.

What Is Upper Airway Cough Syndrome?

In the broadest terms, upper airway cough syndrome (UACS) is a chronic cough featuring odd sensations in the upper airway.

Some definitions state a tickling cough that’s worse in the mornings and at night. Others report it as a sensation of something stuck in the throat or the presence of mucus in the throat. Regardless, a peculiar sensation in the throat is pivotal to the diagnosis.

What are the Symptoms of Upper Airway Cough Syndrome?

Is Upper Airway Cough Syndrome the Same as Postnasal Drip?

Previously, UACS was called postnasal drip syndrome. It’s unclear whether the nasal secretions that drain into the throat cause the cough or if the direct irritation of the receptors is responsible. As a result, the American College of Chest Physicians renamed it in 2006.

UACS is one of the most common causes of chronic cough. But, some physicians challenge its existence as a distinct clinical entity. They also question the precision of clinical assessment. Firstly, experts argue that many UACS features form part of a general cough hypersensitivity syndrome. Additionally, UACS may coexist with other respiratory conditions.

While the exact cause is unclear, researchers believe it’s sinonasal in origin, and some factors aggravate symptoms of UACS. But, in general, whenever there are more nasal secretions, the risk of UACS increases.

Allergies can trigger the body to produce more mucus, being seasonal allergies cause a significant increase in secretions. Plants releasing pollen seem to be particularly potent.

Some common allergies include:

But, weather changes, such as cold or dry winter air, may also irritate the nasal passages and cause the body to produce more mucus. Infections like the common cold and flu are more prevalent during colder months. The body reacts to these germs by producing more mucus to flush them out.

Gastroesophageal reflux disease (GERD), often known as acid reflux, results when stomach acid backs up into the esophagus can also cause UACS. In addition, because of a high prevalence of upper respiratory symptoms associated with GERD, it may occasionally mimic UACS.

Another cause may be nasal abnormalities that cause mucus to drain incorrectly. The excess mucus may irritate cough receptors and worsen symptoms.

Chronic Cough: A Symptom Of The Upper Airway Cough Syndrome

The UACS is a chronic cough syndrome caused by a range of upper airway diseases rather than a particular condition. UACS refers to various rhinosinus disorders that can cause cough, including allergic and non-allergic rhinitis and sinusitis.

Additionally, most chronic cough instances are caused by one or more of the following factors, which can occur alone or in combination:

There’s no diagnostic tool for UACS, and doctors mostly rely on a series of tests to diagnose the condition. And since chronic cough is one of the primary complaints, a clinician usually eliminates pulmonary causes first. The diagnostic approach includes:

Another helpful diagnostic approach will be allergy testing to determine if you are allergic to any inhaled allergens.

If the evaluation doesn’t reveal the cause of a chronic cough, your doctor may start a therapeutic trial. For example, your doctor may suspect allergic rhinitis and prescribe antihistamines. However, if a cough persists for more than a week after treatment begins, your doctor may switch medication or request sinus x-rays.

Rhinitis is one of the primary causes of UACS, and each type responds to different treatments. Therefore, it may take a while to receive a diagnosis.

Studies state that when a specific cause for cough is not apparent, empiric therapy for UACS should be used first, with medications that have been specially investigated and demonstrated to be effective in treating this syndrome, before undergoing a thorough diagnostic workup. Other research shows that it is both diagnostic and therapeutic to try empiric therapy with a first-generation antihistamine and a decongestant.

How Do You Treat Irritated Airways?

When doctors know the cause, various over-the-counter and prescription drugs can treat irritated airways. The treatment choices are as follows;

If you are looking for natural ways to treat your airways, here are some natural cough medicines you can use.

When Should I See A Doctor?

A nagging cough that lasts more than eight weeks warrants a doctor’s visit. But eight weeks is a long time, so it’s within reason to speak to your doctor before then if you’re concerned.

You should also check with your doctor if your persistent cough comes with other symptoms like:

It’s best not to wait for your cough to sort itself out. Long-term coughing and especially violent coughing fits can lead to complications such as incontinence or fractured ribs. Rather see your doctor about a cough, figure out the underlying cause, and get yourself on the road to health.

Upper airway cough syndrome is a treatable condition that affects millions of adults worldwide. You can reduce coughing with medication or eliminate triggers or allergens whenever possible. UACS is annoying, but it clears up on its own in many cases. However, if you experience persistent symptoms, see your doctor for diagnosis and treatment.

Keeping track of your cough can help eliminate some of the steps towards a diagnosis. When a cough starts, how often you cough and cough more at certain times can help point your doctor in the right direction.